How tax revenues are allocated and distributed.

The principle of raising taxes at the highest layer practical and distributing at the lowest layer possible ensures the fairest system with the lowest levels of waste.
There are other implications of this principle which as discussed here, as much for the sake of demonstrating that they are purposefully part of the system.

While almost all LIFE societies will start off collecting taxes at a State level, because that is where the infrastructure is today, pretty soon there will be Community and Region tax variances.
Each layer has the right to levy taxes, so long as those rights have been promoted to them by a lower layer. If States are automatically promoted the right to raise taxes at the start then it stands to reason that Regions will also have the right to levy taxes. In order to constrain initial inclinations to add taxes, and to keep complexity to a minimum, it would be a good idea to have a moratorium on any new taxes until after each layer (CRS) has completed at least one election round. 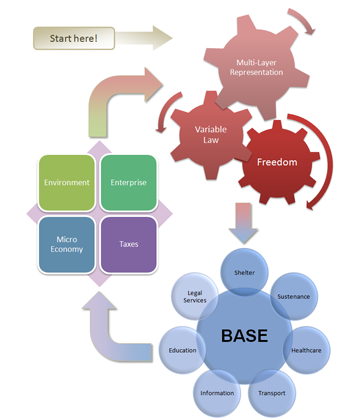 While the Standards of LIFE calls out the primary services necessary to unleash the potential of our societies, it does not prescribe their content or extent for any specific situation. It is obviously true that the extent, depth and type of each service will vary according to the ability of the society to afford it, and the specific needs of the population.
So the precursor to assessing the cost of providing BASE services is to define the BASE services that will provided. There is a maximum threshold budget available for BASE services built into the LIFE tax system and the cost of all services is constrained by this. This means that a society with low median earnings will have less money available for BASE services than one with higher median earnings.
Poorer societies may have to define their BASE services with basic or minimal services. For instance the BASE Healthcare definition might be ‘access to a GP within 2 days walk and a density of 1 GP per 100,000 population’ or the BASE Education definition could be ‘5 years of primary education’. In richer societies, the definitions of the same BASE services is likely to be very different and provide much higher levels of service.
For Shelter and Sustenance services the BASE definition should specify a minimum SSE qualities for each service.
In any case, it is worth noting that defining the BASE services is the second step, after having defined the maximum budget available. It is also likely to be an iterative process as the costs of BASE services and median earnings change over time.

This requires that there is an assessment of the costs of BASE service provisioning across all the constituencies included in the Income Tax application. The assesment will yield a calculation of the average per capita cost for each BASE service and will have as much granularity as possible, to support the splitting of responsibilities between Communities and other layers that they have promoted service reponsibilities to.

The Income Taxes levied must also be sufficient to cover the costs of running the multi-layer representative government, the elections and provide for the pay of the representatives, at all layers from the Community to the World.
Assuming that Income Taxes will be calculated at the State or Transterritorial level, there has to be accommodation made for collecting taxes to fund layers both above and below the layer at which taxes are levied.

Communities receive disbursements of tax revenues for the services they are mandated to provide, subject to any service responsibilities they have promoted.
Services that are promoted are accompanied by the portion of tax revenues attributed to those elements of the service. The tax collecting authority will observe promotion orders from any constituency and direct tax revenues accordingly.
The receipts of the Community are proportional to their population as a part of the entire population covered by the tax, and do not factor in any special circumstances of the Community (except insofar as the assessment of average service costs across the entire taxable population is affected by the inclusion of the assessed costs of that Community in the overall assessment).
The Income Taxes levied will be sufficient to distribute the assessed average per capita cost to each Community based on their population, as well as covering the administritive overhead of collecting and managing the tax revenues.
Each Community will receive the same revenues per person, even though their costs may differ from the average. These differences in revenues v. costs can be handled by the Communities in several ways, including:

To facilitate the optimal distribution of certain BASE services, such as Sustenance, the taxing authority will operate a BASE Credit (BASEC) management system.
The BASEC system maintains records related to the availability of BASE services on a per person basis on behalf of the Community. In the case of Sustenance, for instance, the weekly credit value applied to each resident’s BASEC account is determined by the Community in line with its policies and priorities for the allocation of BASE funds (see above).
BASEC systems are maintained separately from the xID system but can leverage the xID system for recipient identification.

Corporation Taxes are designed to be levied at the same basic rate as the base rate of Income Taxes. This is partly because it removes any barriers as to how micro businesses declare their income, and partly because it gives business the same interest, as individuals in the society have, in increasing the efficiency and lowering the costs of BASE service delivery.
Having said that, Corporation Tax revenues are not specifically reserved for covering the costs of BASE services in the classic Standards of LIFE model. Tax revenues from corporations are discretionary and can be allocated as the layer of government that levies them sees fit. This raises the possibility that if Corporate Taxes are set at a State level equal to the base rate of Income Tax, which is being levied at that level, and the Regions add an additonal Corporation Tax then the Corporate Tax rate will be higher than Income Taxes. Frankly this isn’t too big a problem and may even act as a natural brake against loading up Corporate Taxes. The alternative, and probably more appropriate, revenue source for constituencies below the layer that levies the Income and Corporate Taxes is Sales, or Use, Taxes.

The Standards of LIFE is an open-origin project to develop sustainable structures for today's human societies to replace the dysfunctional parts of our existing industrial democracies.
This blogroll provides context for the LIFE policies by showing how the problems in today's headlines would be addressed by applying the Standards of LIFE.