Government is the organizing instrument of society and to make sure that it is acting in the best interests of its citizens, it is managed and controlled by representatives of the citizens who are directly accountable for their performance to the citizens: Representative Government.
How to create and structure such a representative government hasn’t totally eluded people to date but it could do with some improving. Many of the existing structures carry burdens of historical trappings, most often in the form of weighting the system to support legacy fidelities or old power centers.

The time has come to bring a breath of fresh air to our representative structures, using the experience we have gained, to create a more perfect structure that is better suited to the world we now live in.

Nothing too radical, just a few tweaks here and there. Nothing that isn’t already being practiced somewhere and nothing too complicated. A system that gives citizens a direct say in their government and represents citizens directly, in all their glorious diversity. A structure that reflects the many layers of the world we live in from our local community to the world population. Hey, a little flexibility wouldn’t go amiss; a structure that allows for and embraces the many regions, cultures, languages and differences that exist, while at the same time providing every citizen with a uniformly weighted sayMLR-BASE-cycle.png in the affairs that affect them.

The LIFE structure for representative government has been created with all the above in mind. It is a simple system with universal applicability. Elegant in its flexibility, yet firm in its stance because it is founded on, and grows out of, the core principles of LIFE.

There are three interrelated elements to the LIFE structure for representative government:

Imagined as a series of excentric rings emanating out from the core of every individual until the last ring encompasses the whole world. Those rings are simplified and consolidated into the following:

A voting process that allows for and accommodates the variety of peoples’ perspectives whilst providing for effective decision making and action.

A legal system that works with multi layered constituencies to give voice and power to the appropriate place in the structure, where it can be most effective, whilst allowing for that place to change when people want it to.

Working together, these elements create a harmonious structure of representative government and, through its very nature, it contains the solutions to the vast majority of problems around the world stemming frm issues of self determination.

A more precise definition of the LIFE structure for representation can be found in the Constitutional Template.

There are 5 layers of government that are included in this structure, corresponding to the 5 outermost layers of the 7 layer model. The two innermost layers, Personal and Household, do not have, nor do they need, formal governing institutions.

Here is a table giving a guide to each layer: its size in terms of citizens, the ratio of representatives to citizens and the term that a representative is elected for.

The primary determinant of the size of a constituency is geography, Nature has arranged our world thus and it makes every sense to follow the same pattern in seeking out the boundaries of our political responsibilities.
Beyond geography, the size of the population is a necessary determinant. In the model laid out above there is a basic assumption that each State and Transterritory will consist of approximately 10 constituent members in the layer below. Allowing for a factor of 10 variation in the size of the population of any given layer will provide sufficient flexibility to accommodate the realities of the world we live in. 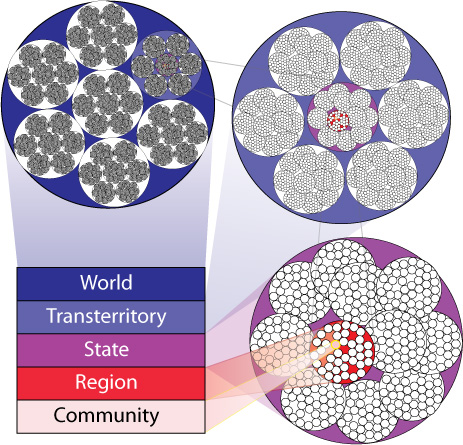 However it is in the size of a Community that the greatest flexibility will be necessary; it is possible to conceive of a remote island with a population of less than 50 which legitimately represents a Community, and at the same time there could be a small town of sufficient cohesion that it understands itself to be a single Community but has a population of 50,000. To set hard and fast thresholds here for the size of a Community is neither useful nor likely to be universally applicable. Nevertheless, for the sake of at least some completeness to this treatise, it is noticed that any community whose population falls below a voluntary or practical threshold will be absorbed into its neighbor(s). The not inconsiderable burdens and responsibilities incumbent on any constituency to provide a legal system that supports their legislative authority will no doubt impose a sober limit on the minimum size of any Community.

Each constituency is based on the assemblage of whole members of the layer below.
This table resents a rough guide to the number of constituencies in each containing layer above Community. The actual number will reflect the specific circumstances of the place and people.

The members of a larger entity should be geographically contiguous and if separated by water deemed to be contiguous with the nearest land.
Logically membership only applies to Communities’, Regions’ and States’ membership of Regions, States and Transterritories, respectively. (The use of the words to name each layer or constituency is purely for ease of use and any interpretation of the word does not confer a different meaning than is intended here by the principle of the voluntary grouping of political responsibility and membership by excentric circles radiating out from the individual to encompass the whole world.)
Each constituency is a member of the next largest constituency and may change its membership to another with which it has geographic contiguance. e.g. A Community may change membership from Region A to Region B, so long as it shares a geographic border with B.
No entity has right of refusal or acceptance of the membership of a constituent entity. However a constituent entity that is electing to change its membership must adopt the pre-existing variable law structure of the entity which it is joining.
Given the consequences of changing membership, especially as it relates to applicable law, it might be sensible to apply a rule requiring a two thirds majority in the constituency in order to change membership.

Every voter shall have a direct vote in each of the constituencies to which they belong at every level. This bears repeating, and perhaps some explanation, as most of us are likely to approach this with a mindset based in the almost feudal structure within which we are used to seeing democracy practiced.

Every voter shall have a direct vote in each of the constituencies to which they belong at every level.

The length of time that a representative is elected for varies by layer and gets shorter closer to people’s personal lives, to provide responsiveness, and longer at the higher layers, to promote stability and long term action. Any elected body may decide by a majority to hold elections sooner but otherwise will be required to stand for reelection before the end of the term.
The above proposed terms provide for a staggered cycle and result in one third of all years not having any elections, a little over one third of years having elections for two layers, about one in four years has elections for 3 layers and elections for 4 or more layers in the year occur less than 3% of the time.
There should be no extra-democratic limits to the re-election of representatives.

A voter shall be every human 16 years old or older. A voter that is the legal guardian of another born human who is ineligible to vote shall have their charge’s vote as well.

Political parties are voluntary associations of the individual representatives but are not intrinsic to the voting or selection process. People elect people to represent them and those representatives may choose or not choose to confer with or associate with others of like mind but no such association shall hold sway over a representative’s legitimacy supreme to the voters election.

Intrinsic to the working of a multi-layer democratic system is the practice of variable law. In combination these two principles work together to allow for a patchwork of societies that reflect and honor the varieties of people and cultures across the world and also provide the solution to the vast majority of tensions and aggravations between people and cultures around the world.

In the structure of government and politics envisioned through the Standards of LIFE, the practice of democracy and the implementation of Variable Law are inextricably intertwined. Inherent to the relationship is the responsibility of constituent members to accept the majority position of their peers on the retention, promotion or retrieval of aspects of law.
For instance, there may be a few Communities in a region that vehemently disagree with a majority vote to promote an aspect of law to the Region. It is their responsibility to accept the majority decision but, in this case, the dissenting Communities may consider this issue to be so important that they wish to secede from the Region, and if they are of sufficient size and are geographically contiguous this may be an option for them.
However, if they cannot muster the weight for secession and remain incalcitrant in their dissent, then their opposition needs a solution short of federal imposition. The answer is that they have effectively abstained from participation in the Region’s affairs and so the Region should withdraw services provided including the collection of sales taxes, the provision of xID storage, disaster coverage and any other services provided to the Region’s participating Communities. The dissenting Communities will be subject to the same standards applied to LIFE-Other constituencies as defined in External Relations.
The expectation is that, over time, there will be a convergence of view on the matters and that subseqent voting cycles at the various levels will resolve the disagreements.

The structure described in LIFE’s multilayered democracy provides for a directly elected world government and it is toward this goal that the United Nations must be reformed or else replaced.
Similarly with subdivisions of today’s international government collaborations such as the G-8, the eventual solution is not to tinker with their membership but instead replace them with the institutions of multilayered democracy.

One thought on “Representation”

The Standards of LIFE is an open-origin project to develop sustainable structures for today's human societies to replace the dysfunctional parts of our existing industrial democracies.
This blogroll provides context for the LIFE policies by showing how the problems in today's headlines would be addressed by applying the Standards of LIFE.